Are the the Bean Station immigrant detainees “marching” towards deportation?
Court bond hearings or motions to reopen prior removal orders is what would really make a difference.

Weeks have passed since the biggest raid in a decade took place at a meat packing plant in GRAINGER COUNTY, Tennessee. This situation stormed into the lives of hundreds, especially the families of undocumented immigrants. Many of those who are still arrested are now facing deportation and the sense of fear has overtaken the whole town; it has been reported that hundreds of kids did not attend school after the raid and teachers are concerned for the children’s well being as they try to comfort their classmates. 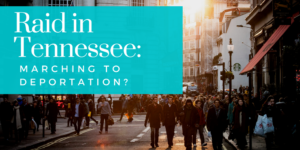 Expressions of support of those who feel that the community has been torn apart have quickly emerged, however, time is of the essence and, if efforts are not focused correctly, these families will be separated as deportation proceedings are on the works.

From his office in Tennessee, immigration lawyer, Sean Lewis, can’t hide his discomfort as he scrolls thru his computer screen reading a note about organizations gathering signatures to “tell ICE” to release the detainees. “Marches, banners and signature collections are completely inefficient,” says Lewis, “what they need is court bond hearings or motions to reopen prior removal orders”.

Years ago public outcry might have gotten ICE to listen and exercise discretion to release people who violate the immigration laws. Those days are long gone, and no-one can just “tell” ICE who is a deportation priority, not to deport people. Nowadays nobody is listening except the judges in court.

It is the immigration lawyer’s opinion that if people really want to help —and not just stirrup emotions— What they should be doing is informing the families and detainees about the concrete legal actions they are to take so that they can avoid deportation and begin a process that may hopefully result in legalizing their status in the country.

ICE is not marching so that undocumented immigrants leave the country. They are acting, running raids and using the established means to see that happen.
Should you wish to help the families of those facing immigration detention, visit https://www.aila.org/ for a list of immigration lawyers that may represent them.