“The day Monserrat Escobar Arteaga walked through the Boston airport, she changed.

Shy and soft-spoken, Arteaga always considered herself an introvert. She was sheltered. Used to going unnoticed.

Yet on the day the teen traveled to Germany for a once-in-a-lifetime student exchange trip, she was seen in a way she never hoped to be.

As she stood in line to board the plane, a man nearby sized up her Mexican passport.

“You don’t belong here,” he said venomously. “Go to the gate for Mexico.”

That’s when something in her shifted. Anger. Fear. Frustration. It all surfaced at once.

“I decided I was sick and tired of being quiet all the time,” Arteaga said.

This fall, she was named a finalist for 2018’s Nashville Youth Poet Laureate, which gives a voice to young writers in the community.

She writes about topics that make people uncomfortable. Immigration. Racism. What it’s like to be Hispanic.

She shares the story not only of the day she left the United States to travel abroad and the turmoil she experienced trying to return to it — but also of the fear that has visited her ever since.

Arteaga was just 4 years old the day her mother braided the little girl’s hair and crossed the border to the United States.

The family was from Hildalgo, a providence in the countryside north of Mexico City. Her parents met when they were both waiters at a restaurant, but life was hard.

Mexico City was a place of high rent and low wages. A place where a kilo of eggs, similar to our dozen, may cost 30 pesos to buy on an 80-peso-a-day wage.

It was also a place where a mother feared for her daughter. Where a girl could easily be swept off the street into drug or sex trafficking trade.

The Arteagas sought something better for their family.

They found it in Nashville.

Freedom of speech, freedom to travel

A child with a vivid imagination, Arteaga embraced creativity. Quietly.

For a school test in fifth grade, she was asked to write a simple story about unicorns. She went all out, creating a complex plot with the magical creatures saving an island.

Sophomore year, she had a teacher who would read and write about poetry. She encouraged Arteaga to write a piece, and she gave her a notebook to put her thoughts.

It was a safe space for her expression, especially in a world where she felt judged for what she looked like and where she was from. Too American to return to Mexico, too Mexican to be accepted in America.

“I felt oppressed,” she says, “but that notebook gave me a bit more liberty to express myself.

“America has such strong freedom of speech. I could be more open.”

She longed for the openness of other spaces too, for the adventure of the stories she read and she wrote.

In school, they offered students five languages. All her friends said she should take Spanish because she would pass easily. But Arteaga, already fluent in her family’s native language, wanted to push herself.

That’s how she ended up learning German and embarking overseas.

For mom Gabriela Arteaga Zamora, the trip was a leap of faith.

Her daughter is a DACA student, part of the Deferred Action for Childhood Arrivals program that protects young undocumented immigrants from deportation.

“I didn’t really choose to come to the United States,” Arteaga said. “It was more of a necessity.”

Such status has always left Zamora with feelings of unease. And recently, with the news that President Donald Trump’s administration plans to scrap the DACA program in early 2018 unless Congress intervenes, the future is even more uncertain.

But Zamora came to the United States to give her children opportunity, and the chance for her daughter to study abroad was one she could not pass up.

So they set about securing the necessary documents.

To travel out of the country, Arteaga had to have an advance parole, which is a permit that said even as a non-citizen she could be admitted back to the United States — under a TSA officer’s discretion.

It showed the dates and countries to which she planned to travel.

And it accompanied her Mexican passport.

‘You’re not supposed to be here’ 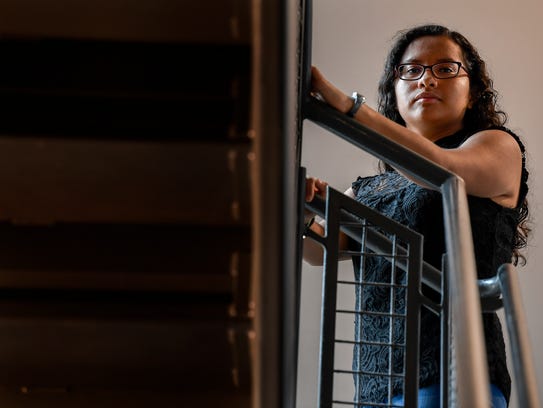 The first stop en route to Germany was Iceland, via Boston.

That’s when the man saw her. He was of retirement age, a person who looked like he has seen his share of the world. More well-rounded, she assumed, than she.

And he was scolding her.

She was bewildered, scared.

“But it gave me the courage to finally speak up,” she said.

She didn’t do it that day. Not to that man.

And for a moment upon her return, she thought she may never get the chance.

The power of prayer

It was a trip of a lifetime.

“I know it’s weird,” she said, “but I have always been called undocumented or an illegal alien. Being called a tourist was a nice refresh.”

But when it was time to re-enter the United States, the joy disappeared.

While her American classmates went through one security line, Arteaga was forced into another. She was told to follow a blue line and wait for a security officer.

She had only her passport and travel documents, her cell phone, and a bag of German chocolates.

She wasn’t allowed to make any calls. Another woman cried nearby. Arteaga was nervous.

When a TSA officer finally appeared, Arteaga was led to an office that looked like a janitor’s closet and questioned.

“I basically had to tell my whole life story,” she said.

She wasn’t sure she would ever see her family again.

The officer eventually let her onto the plane flight home.

Arteaga had been gone three weeks.

“God blessed us,” Zamora said in Spanish, her daughter translating for her.

A soul that spills out through a pen’s ink

She hasn’t mastered the English language, but she wants to give her children a future.

She sells advertising for a Spanish-language newspaper. She has started a small business with her husband.

She has two other children, a younger boy and girl, both American citizens.

Life is better for all of them here.

She says knows she is in a country that is “not hers,” but she wants her oldest child to be able to call it her own.

That is hard for Arteaga sometimes. She can feel segregated, even at school. When she’s out shopping, she feels like people stare at the color of her skin.

“It’s gotten to the point where I think: ‘Oh my gosh, I am truly an alien because I am not from here or from there.’

But no longer is she silent. In her poetry, she writes about her disquiet, her fears. She shares hope for acceptance and understanding.

“Through the pen,” she said, “my soul just spills out through the ink.

“Poetry doesn’t really have a race or discrimination.

“When people think poetry they think Shakespeare, but the poetry I write isn’t meant to be read. it’s meant to be heard.

“I just want people to hear.”

**LAW OFFICE OF SEAN LEWIS DOES NOT OWN THIS ARTICLE; UPLOADED FOR INFORMATIONAL PURPOSES**