Beginning on August 15, 2012 young people who qualify for the Obama Administration DREAM ACT policy may apply for a two-year reprieve from deportation and get work authorization: but should they see an immigration attorney before deciding to apply in the first place?

On June 15, 2012, The Obama Administration announced Deferred Action for Childhood Arrivals (“DACA”) which is available to those who would have qualified for the DREAM Act had that legislation been passed by Congress. The United States Citizenship and Immigration Service (USCIS) will begin accepting applications on August 15. 2012. Deferred Action status is not permanent and does not lead to legal residency or citizenship. Many immigration attorneys warn that DACA could be revoked by a subsequent administration, and remind the public that Mitt Romney stated he would veto the DREAM Act at least twice.

So the question remains: “Should young people who qualify for this temporary reprieve even apply in the first place without speaking to an immigration attorney ?” 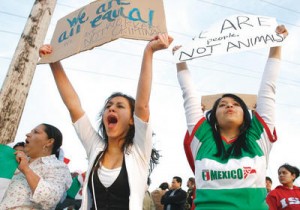 Not every applicant will require an immigration lawyer to successfully apply for DACA. However, an immigration attorney is trained to spot the not-so-obvious red flags that could lead to a denial or even deportation. In order to apply for DACA, the applicant is necessarily “coming out of the shadows” and offering sensitive information about themselves and their family members that could potentially be used for deportation purposes.

Aside from a subsequent administration revoking the DACA and initiating deportations if the DREAM Act does not get passed, cases that could be denied include those with applicants that have had brushes with the law. Immigration Law interprets criminal law very differently that one might think. For instance, the immigration definition of a “conviction” includes cases that were expunged or cases that are dismissed after a period of good conduct or taking certain classes of community service. Some state laws are ambiguous as to whether, for instance, one was convicted of “domestic violence” or assault even where no injury took place. Only a qualified immigration attorney that knows the nuanced area of federal immigration definition of crime can assure that an applicant will be denied based on crime.

Applicants that used false names or social security numbers, or even were arrested as juvenile might be denied in the discretion of USCIS. Discretionary decisions, such as denials of a DACA applicant cannot be appealed.

Some applicants may have been deported by an immigration court and not even know about that. Many people are deported by not appearing at a court date they never even knew about, usually following a denial of another immigration application. If a family member went to a “notario publico” and filed anything with false information, a denial and subsequent knock at the door by immigration agents is a real possibility.

While it is true that the basic eligibility requirements of the DACA program are not complex, and that filling the forms out are not a challenge for most applicants, the decision to file in the first place, or to know whether another immigration benefit might be an option should be seriously considered before sending paper work to the immigration service.

Immigration Attorneys who belong to the American Immigration Lawyers Association (www.aila.org), or BIA accredited representatives are qualified to provide competent and trustworthy advice. There are some groups of non-profit agencies who are claiming that lawyers are not needed to apply for DACA, which is a dangerous and self-serving claim. Even Reps. Dick Durbin and Luis Gutierrez blundered by initially advising people not to hire lawyers while also warning that the law is complex. To make matters worse, there are unscrupulous “notarios” or “immigration consultants” who falsely claim to be competent to handle legal matters who will certainly damage the hopes of many applicants, by incorrectly filing applications or who will just steal money from potential Dreamers.

In all cases, the decision to file for this temporary administrative reprieve ought to be an informed decision to be made after consulting with a qualified immigration attorney.