The US government is, once again, accepting applications for Deferred Action for Childhood Arrivals (DACA), a program that allows people who are in the country without valid legal status to defer possible deportation for up to 2 years. In addition, DACA gives its beneficiaries the possibility of being eligible to obtain a work permit.

Sean Lewis, founding partner of the study, points out that, in order for a person to qualify for DACA, they must meet a series of requirements that may seem simple at first glance, but require a thorough legal analysis. These are:

The felony and misdemeanors referred to by DACA are called “significant misdemeanors” (also called Misdemeanor A in Tennessee) and “misdimeanors,” respectively, Lewis explains.

A Misdemeanor A includes, for example, drunk driving and causing harm to another person. They are crimes that have more severe consequences and punishments. Also included within this group of crimes are those related to drug possession and assaults, as well as crimes for which the offender spent 3 days in jail.

It is possible to be a beneficiary of DACA even with a Misdemeanor A. However, that depends on the reform of the person and if he attended his classes imposed by law. “In general we do not recommend that you apply to DACA if crimes of this type have been committed,” says Lewis.

On the other hand, misdemeanors themselves are about crimes such as driving without a license.

According to the lawyer, crimes committed before the age of 18 do not count for DACA application, since these are not really criminal cases, but delinquency. “A juvenile record does not count as a conviction or misdemeanor,” adds Lewis about it.

On the other hand, it is important to indicate that the “expungment” does work when applying to the program. Expungment is a process by which a person can erase their criminal record. Although this usually has no effect on immigration applications, it does have an effect on DACA applications in favor of the applicant. “If they erased it, it’s not coming out.”

Lewis clarifies that the people who were in the United States On June 15, 2012, with a valid visa, cannot qualify for DACA, as this means that, at that time, they did have a valid legal status to remain in the country.

In that sense, he adds that the help of a lawyer is necessary to be able to review the legality of all the applicant’s documents, since he could have been in the country legally without knowing it, so he does not recommend applying for DACA without legal advice.

Can I apply for DACA if I was previously deported?

Yes, DACA differs the deportation that would apply to anyone without valid legal status in the US.


In that sense, a person who had previous deportations can apply for DACA

Can I travel as a DACA recipient?

DACA does grant the benefit of travel.

However, you cannot travel for vacation or leisure reasons. The reason for the trip must be urgent, such as a family medical emergency.

Travel for work reasons is also allowed. For example, a person may attend an international forum.

Residence thru a family member

Mrs. Maria T. got her Permanent Residency thru a family member who is a U.S Citizen! Congratulations!

We’re celebrating at the law offices of the immigration attorney Sean Lewis. A new stage in the life of our client Mrs.Maria T, who got her permanent residency thru her spouse, who is a U.S Citizen.

It is a right of the American citizens to be able to apply for legal migratory status for some of his/her relatives, such as a spouse, parent, child and a sibling, but there is a process in which, if you want to obtain permanent residency for a family member, you have to be able to meet several requirements and complete forms which may be complicated.

Take a look at this interesting testimonial in which a client shares the bad experience she had when completing the forms herself to apply for permanent residency for her daughter, and was denied (even though she’s a U.S.Citizen)

What should I do if I want to apply for permanent residency thru a family member?

As we mentioned, every U.S. Citizen has the right to apply for permanent residency for a direct family member, however, an important recommendation is to consult with an immigration lawyer as each case is different and immigration laws are constantly changing.

Relax Gringo, Mrs.Maria got her permanent residency thru a family member!

At the Law Offices of Sean Lewis, we always celebrate when one of our clients gets the great news of having their applications approved because all the team members strive to cover every little detail so that the end result is excellent* and today, on behalf of all the staff, attorney Sean Lewis and attorney Elizabeth Patton we want to congratulate Mrs.Maria T. And her family. She’s now wearing her Relax Gringo, I’m LEGAL!! shirt. 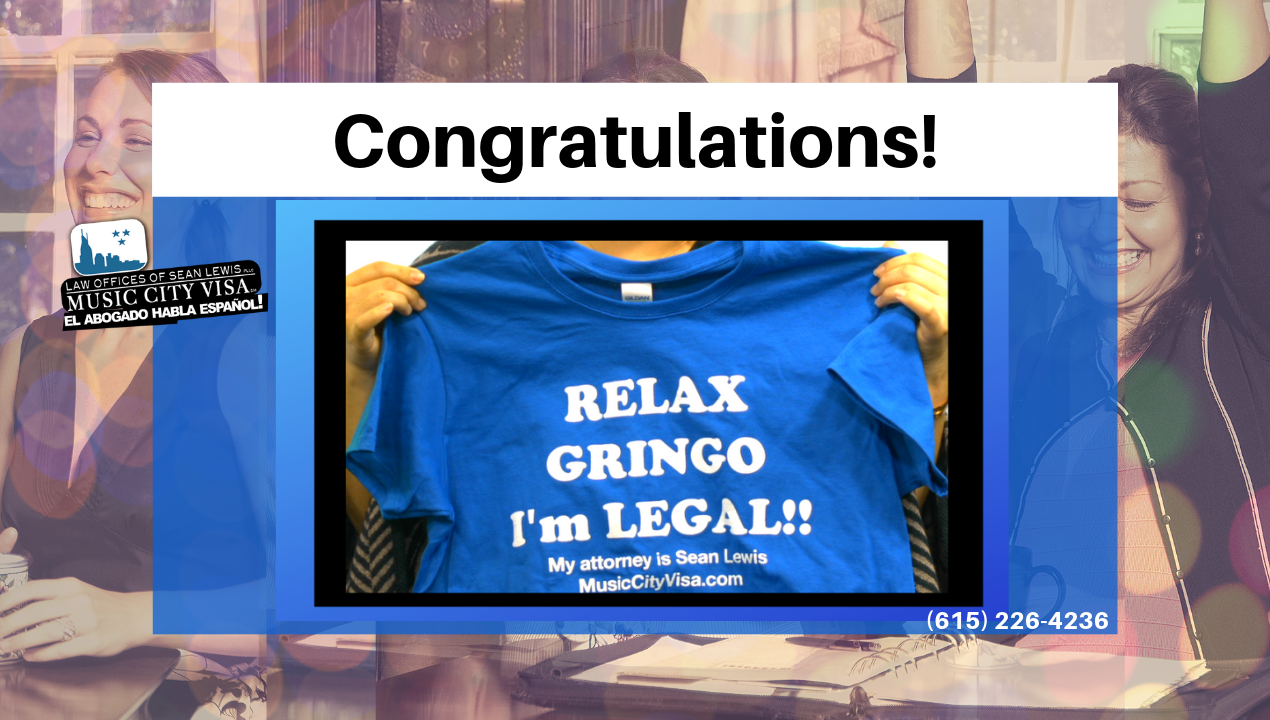 The New Law in Tennessee has forced a lot of fear into the immigrant community, but, should everybody be afraid?

Elizabeth Patton, Associate Attorney at the Law Offices of Sean Lewis, answers some frequent questions we have received.